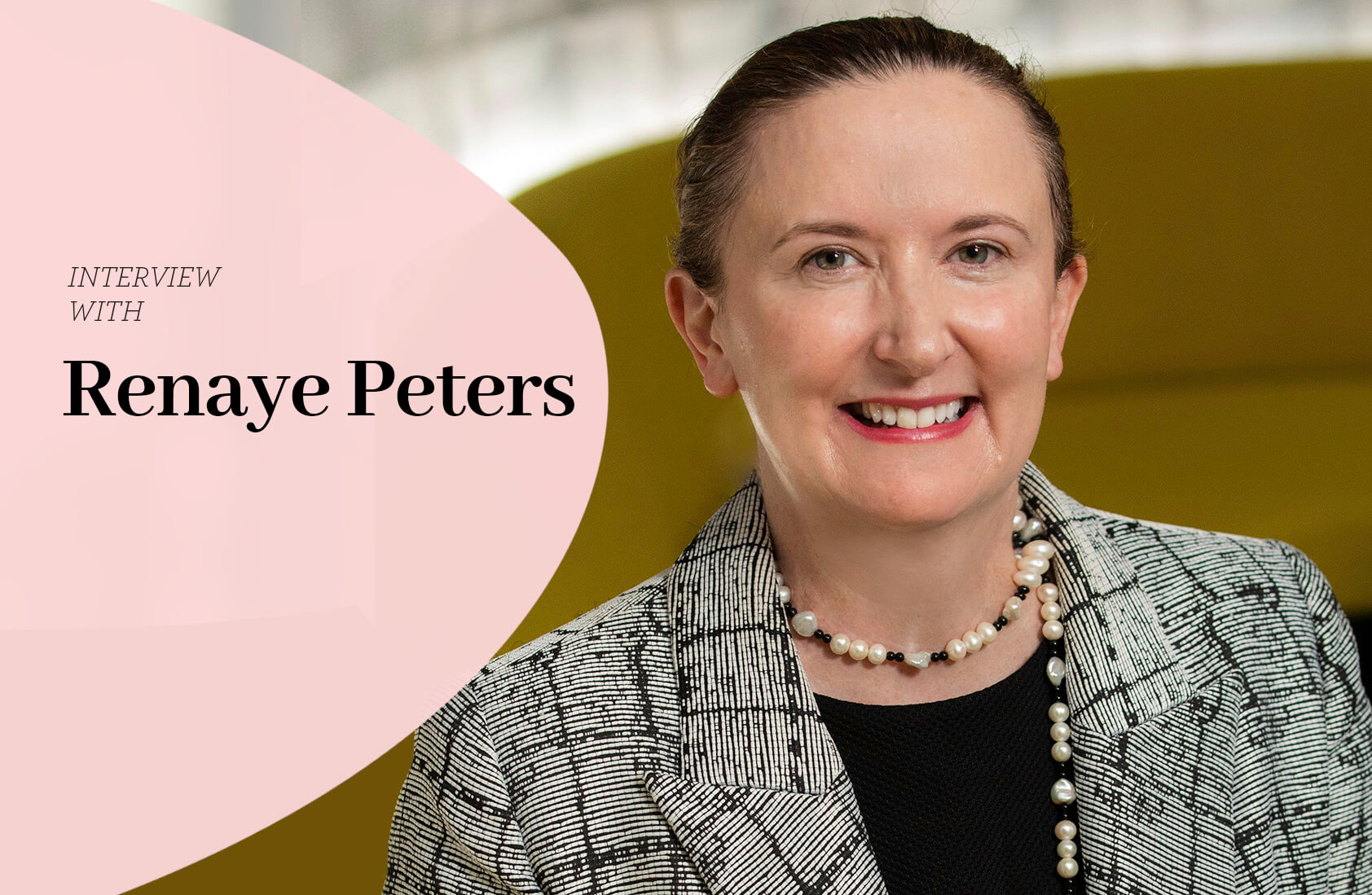 Renaye Peters has more than 25 years of construction, infrastructure, property, and mining industry experience. She is currently vice president of campus infrastructure and services at Monash University, and serves as a director of the board of Queensland Rail. Renaye is also a council member of the Property Council and a Fellow of the Australian Institute of Company Directors. She has held numerous board positions over the past 12 years in addition to her full-time corporate roles.

Renaye has two children aged 12 and 15, and splits her time between her family home in Brisbane and her work in Melbourne.

We interviewed Renaye to find out more about her career progression and to get her advice on how to become a company director.

How do you manage so much travel?

I’ve recently taken up a role based in Melbourne and it works because I’ve been fortunate and made some good choices. My husband has always supported my career and he works, but he doesn’t travel so he takes on all the home stuff. I’ve always travelled a lot; even though my previous role was based in Brisbane I was always in Sydney. Our family has always been geared for me to be away and if I’m home too much it gets weird for them.

We’ve also had a lot of support. When the children were younger, we had nannies and both sets of grandparents were always around.

I grew up with a mum who worked full time and studied in the 1970s when that simply wasn’t ‘done’. My father did housework and thought nothing of it. I saw that Mum would feel guilty at times but we didn’t ever feel like we were missing out. I vowed as a child I wouldn’t feel guilty for pursuing a career.

And I don’t feel guilty. I love my career and my family. Of course, I do miss out on some things but even mothers who have a job without travel can’t get to all the school activities.

We have a mantra in our family that everyone gets to pursue their dreams and we help each other do it, in little ways and big ones. My husband wants to sail until he’s 80 so we have boats. My daughter wants to sing, and just made the Australian Girls Choir. We all pursue our dreams with the support of the entire family.

When you first had your daughters, how long did you take for maternity leave?

While I planned to have six months off because I thought that would work for me, I suffered from post-natal depression and my GP knew me well enough to prescribe a return to work. It worked and so, when I had my second daughter, I planned to go back to work at three months. That was the right approach for my unique circumstances but I wouldn’t necessarily recommend it for all women. Everyone is different so it’s important to do what’s right for the individual.

When mentoring young women, what advice do you give them about maternity leave and returning to work?

Different people need different things but I think one of the key things is to stay in touch so you don’t feel isolated from your career. This could be going to an industry meeting once a month to engage with your peers and hear about what’s happening in your industry.

There are firms running great programs where they continue to invite people to things so they can choose to engage. That’s helpful because some women lose so much confidence even in a year.

In general, my recommendation is that women shouldn’t see their job as just a job. Usually, you’re part of an industry and it’s healthy to think of yourself as part of an industry, not just turn up to a job. So, if you’re on maternity leave, you can remain connected in a broader way than just talking to the people you engage with daily.

However, it’s important to be realistic. No one is superwoman. Working, studying, and having kids; you need support or you can’t do it effectively. No matter what it looks like from the outside, no one is really doing it all. Most people have help of some kind. It’s about how you create a support network for yourself that will give you what you need.

How did/does your support work?

When I was pregnant someone reached out to me with advice and I will be forever grateful to her. She said, “You’re so used to having everything organised, you will struggle with the challenges that are thrown at you every day. Kids don’t come with a rulebook or a manual. My biggest recommendation to you is to have as many backup plans as you can. Then, you know you always have someone you can call when you need help.”

That worked most of the time. The biggest drama would be if the nanny rang in sick. Having backup plans in place included making sure the kids were comfortable in the environment and that everyone knew the rules and how things were run.

I had a perfect house until I had children but I’ve let that expectation go now because it’s unrealistic. We’ve also given up on cleaners. We did that for a decade but, in the last five or six years, it’s more hard work having a cleaner than the hour it takes me to whip around and do stuff. And our kids are of an age where they can clean a bathroom and their own bedrooms.

How have you gotten ahead in such a male-dominated industry?

In my current role it is not quite so male-dominated, I’m pleased to say. It’s far more diverse, which is great. I’m learning so much and it’s been really interesting. I’m really enjoying the chance to see the world differently.

I worked for 10 years for men who weren’t perfect. I was one of very few women. They were really nice blokes and, when they messed up (which they did regularly), it wasn’t because they were being horrible. It was just because they genuinely didn’t get it. These were actually amazing men who were supportive and encouraging. Sometimes they saw things in me that I didn’t see at the time.

And, if you worked hard and did well you got promoted and you got interesting projects to work on. This was even more surprising because not only was I a woman, I was an architect, rather than an engineer. This meant that, when I’d get new bosses, they often didn’t know what to do with me. So, I had to show them that I could contribute, despite being a female architect.

One example of how a potential disappointment led to an amazing career direction happened as a result of one of these men. I was short-shortlisted for an MBA at Harvard, which was a gigantic opportunity. The final hurdle before I could enrol was to get a letter from my boss confirming that I would have a job when I got back. Between asking for the meeting with my boss and sitting down with him, I had fallen pregnant.

That was a difficult conversation and, although happy to be pregnant, I was devastated to miss out on the Harvard opportunity. However, my boss said, “You don’t need an MBA to do your job better but having a child will likely make you a better manager.” He was very supportive and he was right.

Because he knew I was disappointed to miss out on such a valuable education opportunity, that boss sent me on a company director’s course. That was mind blowing. It helped me understand so much more about running a business from a board level. It was incredibly insightful for him to do that, and it set me on a path where I could become a corporate citizen and contribute more.

What advice would you offer for women who want to become a company director?

Start by doing a company director’s course or something similar. Even if you don’t want to become a director, it’s a great way to get a better understanding of the corporate context you’re working in.

Then it’s a matter of opening yourself up for invitations to join boards. This involves following an interest, making yourself available, and letting people know you’re passionate about the industry.

To make it work, you may have to start really early or get your boss’s approval to finish work early to attend board meetings. It’s important to set up the context in your own organisation so that it’s OK to do that.

When I go for a job, I make sure my board commitments are clear upfront and that my preference is to retain the board roles. I have turned down roles if this has been a problem for the organisation. Within office cultures, there’s not always support for that. This is where it’s important to consider yourself as part of an industry as opposed to just having a job.

Once you’re on a committee or a board, people can see your skillsets. If you sit on a committee and do nothing, you add no value, so you’ll go nowhere. You don’t necessarily want to be known as a loudmouth but it’s important to think about what you can contribute. And remember that being a board member affects your reputation so you need to be ready to do the hard work so your reputation is enhanced.

What’s important to you in a role?

Besides flexibility, I need a challenge otherwise I won’t turn up to work because I get bored easily. Another thing I realised in the last six or seven years is that I need a real sense of purpose in what I do. In the construction industry we say, don’t tell a man he’s building a wall, tell him he’s building a chapel. I need to know I’m contributing to a greater purpose.

What’s the biggest challenge you have faced finding a balance between work and parenting commitments?

One unexpected challenge is that children are needier as teenagers than they were as babies. They need more guidance and emotional support, which requires a lot of mental attention. At the same time, our parents are ageing and need more help. So we have these demands at both ends of the spectrum, and we’re in the middle of this sandwich. So, right as my career is peaking, the needs of both my parents and my children are increasing. That’s a challenge, and my husband and I have to really work as a team to make sure everyone’s needs are met.

Being a mum and trying to work is challenging for everyone no matter what you’re doing. Range of challenges. The thing I’ve observed over time is the privilege of having money to solve issues. My story doesn’t reflect the story of nurses or teachers, for example. Or how women manage when they can’t afford a nanny or don’t have parents around. There’s no one-size-fits-all answer. Women still dominate those caretaking roles and yet they’re the ones who suffer the most when it comes to being able to fund their retirement and be independent. Their path in terms of working and being mothers is a lot more challenging. Society hasn’t quite caught up with how to make that more equitable.